The giant pharmaceutical companies, often referred to as "Big Pharma," are always looking for ways to make more money through the development of new drugs. The development of a new drug today is estimated to cost around a billion dollars. Included in this cost are the costs of research and development and years of testing starting with isolated cell studies to determine how cells react to the drug and note any toxicities produced by the drug. The isolated cell tests are then followed by animal testing, and if the drug fares well in that phase, human trials are begun. Many drugs make it through the first two testing procedures, but aren't released because there is either no particular advantage of the drug over existing drugs already approved for sale, or something in the initial testing procedures was considered risky. An example of this was the development of anabolic steroid drugs in the early 1960s. Steroid chemists produced thousands of potential anabolic steroid drugs, all of which were based on testosterone. But most of the drugs never made it to the commercial market because the animal testing showed potential health problems. In the case of oral anabolic steroid drugs, these problems usually involved adverse changes in animal liver and cardiovascular function. While animal reactions to drugs don't always carry over to human physiology, in many cases they serve as warnings to what could happen if humans used the drugs. As such, the anabolic steroids that showed toxic effects in lab rats were never submitted for approval for human usage. But the drugs were cataloged, and years later some shady supplement purveyors found the original discarded steroid formulas and packaged them as "pro hormones" on the sports supplement market. But since these same drugs showed toxic effects in animal studies done 35 years earlier, it wasn't much of a surprise when humans, especially those interested in seeking added muscle mass, began to use the "supplements" and showed toxic effects in the liver. After some reports of humans who experienced serious liver problems after using the "pro hormones" appeared in medical journals, the Food and Drug Administration eventually removed them from the market. An amendment to the Anabolic Steroid federal law was passed first in 2004, then again in 2014 that banned the future use of these resurrected old toxic steroids.

Scientists working at a lab owned by the pharmaceutical giant, Pfizer, in Sandwich, England were experimenting with some new drug formulations in the mid-1990s. One of them, then known by its experimental designation of UK9240 was being looked at as a treatment for hypertension, or high blood pressure, as well as angina, a pain in the chest caused by coronary arteries narrowed by atherosclerosis that inhibits blood circulation in the heart, leading to a lack of oxygen delivery . . .

Join today and get access to this article and all past and present Newsletters, since September 2014.  Each month you’ll get a new issue sent to your inbox.  Subscribe today for only $10/month!

Boost Your Size, Strength and Leanness With…
Supplements That Work
Top Researcher Cuts Through the B.S.
and Shows You Which Ones Really
Pack On Muscle and Melt Off Fat 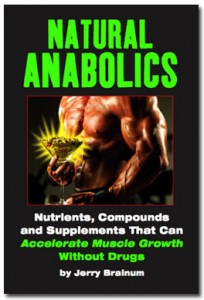